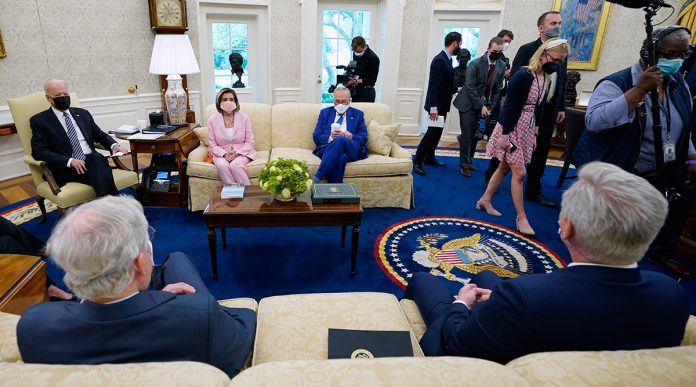 Biden declared that there was going to be a lot of talk about infrastructure to reach a compromise and see how they will “get the people’s work done” within the bounds of everyone agreeing. He even joked during the meeting about “snapping his fingers” to get what he wants regarding infrastructure spending. Biden’s idea of compromise – Do it my way or else.

While McConnell has indicated that Republicans would accept a package between $600 billion and $800 billion, he said Biden’s $2.3 trillion infrastructure plan does nothing but raise taxes and has nothing to do with roads, bridges, highways, airports, and broadband. He shared with reporters after the meeting that Republicans are not interested in reopening the 2017 tax bill, which was a tax cut bill signed by former President Donald Trump, and said that the “way forward on infrastructure” will not include tax hikes. He argued that in February 2020, pre-pandemic times, the United States had the best economy in 50 years as a result of that.

“You won’t find any Republicans going to go raise taxes, I think that’s the worse thing you could do in this economy. I don’t favor having a top-down dictation as to what this package looks like but rather a consultative process in which everybody in my conference is involved in it,” McConnell said regarding the negotiations.

But Sen. Elizabeth Warren said that the $2.2 trillion proposals “doesn’t quite go far enough.” She suggested adding even more money to the budget and said it’s going to take “a lot more” to repair the roads and bridges in America. She also brought up universal child care and said it is a “big-ticket item” that they’ve got to make sure they put enough resources to make that happen. But universal child care is not infrastructure and it is certainly not fixing the roads.

Biden’s package definition of infrastructure goes beyond the traditional meaning. Kevin McCarthy’s campaign wasted no time sending out an automated text message to supporters after his bipartisan infrastructure meeting, in which he accused Biden of pursuing a “radical socialist agenda.”

“I just met with Corrupt Joe Biden and he’s STILL planning to push his radical Socialist agenda onto the American people. I need EVERY single patriot to step up… Fight back,” McCarthy wrote.

Under the plan, only 6% would pay for bridges and roads and the rest goes to dozens of other projects, like building new schools, expanding broadband, and caring for elderly and disabled Americans. It would be financed by raising the corporate tax rate from 21% TO 28%, which some argued wasn’t worth the benefits.

Specifically, President Biden doesn’t address securing the infrastructure from malicious cyber activity. Colonial Pipeline, one of the United State’s largest purveyors of refined fuel, was recently shut down after falling victim to ransomware. While state and local governments, health care facilities, and schools have paid a total of $350 million as victims of ransomware, it is just one kind of cyber threat being posed to infrastructure. Given Biden’s current plan, the expectations fall short of securing the infrastructure they’ve proposed to build.

No matter how many meetings GOP members have with Biden’s administration, radical-left politicians will continue to add billions (and now trillions) of dollars of pork that have nothing to do what the bill is intended for. Biden cannot spend the taxpayer’s money fast enough.